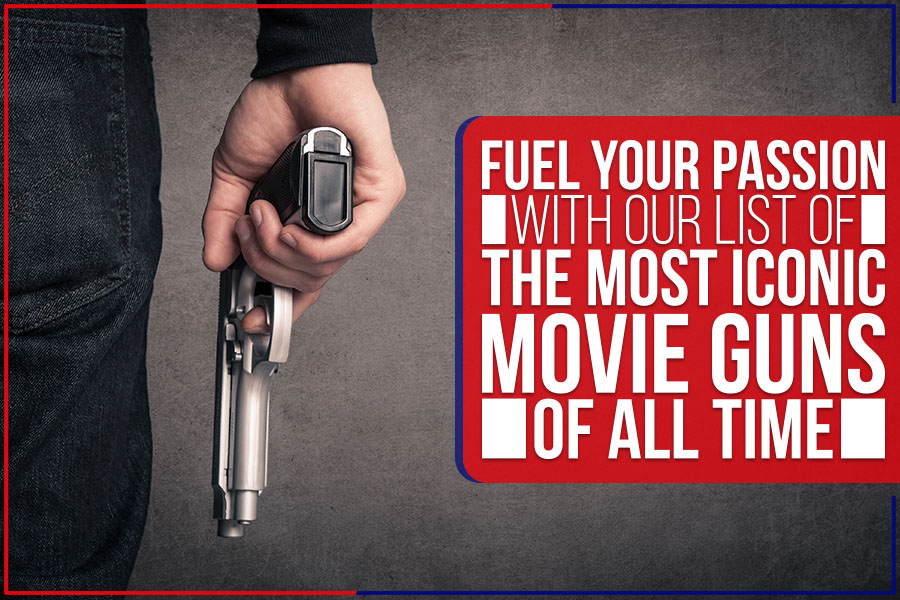 Hollywood is the home for glamour, grandiose sequences, galvanizing scenes, groundbreaking ideas, gregarious celebrities, and guns. Lots and lots of guns. Some might find this parallel a little hard to swallow – placing guns in the same list as the pillars of American cinema, but we can make a believer out of you.

Haven’t you noticed how often we see guns on screen? And this is not just restricted to Action, Thrillers, or Crime genres. You will see guns in Drama, Romance, Comedy, and even Children’s movies and animation films.

Considering the lenient gun laws in the country, it comes as no surprise that the majority of our movies have guns, whether it is the reality-defying antics of James McAvoy in Wanted or the Glock-inspired toy bubble gun Alex uses to save his old neighbor Mrs. Hess in Home Alone 3.

This is a real treat for gun enthusiasts and collectors who get to indulge in their passion for firearms while enjoying a movie with their friends or family. Also, it gives them more ideas about what guns they can add to the collection.

Buy guns and ammunition you want from Eagle Arms in Breinigsville, PA. Click here if you want to get in touch with our gun experts.

Some guns have become iconic, regardless of how little or how much screen time they have had. So, for all those gun enthusiasts out there, we have compiled a list of the most memorable Hollywood firepower.

While the literary version of the suave British secret agent James Bond used a Beretta 418, on the suggestion of British firearms expert Geoffrey Boothroyd, Ian Fleming decided to switch it with a PPK from his novel ‘Dr. No’.

In the film adaptions, Bond carried the Walther PPK from 1962’s Dr. No until 1997’s Tomorrow Never Dies. Yet, till date, this firearm is considered the most iconic out of all the gadgets and gizmos 007 has used over the years.

A truly unique weapon with a retro look is Han Solo’s BlasTech DL-44 heavy blaster pistol, which is in actuality a Mauser C96 “Broomhandle” pistol with embellishments.

Although its scope changes depending on the film, this gun initially had a World War I Hensoldt Wetzlar Dialyt 3X scope and was mounted with an M3 ‘Grease Gun’ conical flash hider.

Clint Eastwood will forever be tied to his 1971 role as Detective Inspector Harry Callahan, whose first appearance in the film was with a long-barreled Smith & Wesson Model 29 .44 Magnum who was trying to stop a daylight bank robbery.

In the scene, Harry kills two of the robbers and wounds a third robber who is slowly reaching for his gun, while Harry says, “But being this is a .44 Magnum, the most powerful handgun in the world, and would blow your head clean off, you’ve got to ask yourself one question: ‘Do I feel lucky?’ Well, do ya, punk?”

The gun that became the go-to choice for gangsters and drug lords used to be far less popular until the 1983 film ‘Scarface.’ Remember the scene where Tony Montana (Al Pacino) yells, “Say hello to my little friend”? That is what made this gun iconic, although, in the movie, the Colt AR-15 was taped to an M203 grenade launcher “jungle style.”

Out of all the ludicrous concepts in the 1980’s Arnold Schwarzenegger film ‘Predator’ where he hunts down an invisible alien predator, one laughable bit was the hand-held M134 Minigun carried by Jesse Ventura’s character Blain.

Blain’s “Old Painless” was, in fact, a giant pain considering how heavy it was. No one can carry it with the ammo and battery pack through the Central American jungles, even a professional wrestler and then-future Minnesota Governor like Jesse Ventura.

Furthermore, Director John McTiernan got the rate of fire reduced from its usual; 6,000 RPM to a mere 1,250 RPM so the audience could see the rounds move in this invisible Predator / intergalactic safari film.

While guns in violin or guitar cases sound like something out of 1930s gangster films, the weapon under discussion is from 1995’s Desperado, where El Mariachi (Antonio Banderas) has transformed the guitar case into a gun (and another case into a rocket launcher).

Inside the case is a modified Military Armament Corporation Model 10 (MAC-10), with an M134 Minigun’s sound effects.

Are you looking for the right firearm to give you action movie feels in Breinigsville, PA? Click here to start shopping for firearms and more at Eagle Arms.

6 Tips For Choosing Your Ideal Holster: Understand A Good Fit